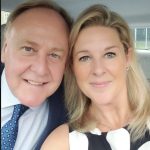 The Trustees extend their congratulations to Clare Villar, an accomplished and talented artist, and the Commandant of the Staffordshire and West Midlands (North Sector) Army Cadet Force, Colonel Simon Donegan, who are getting married today (28th May 2022) before jetting off to their honeymoon in Mauritius. We wish the happy couple every happiness for the future.

This has been a very challenging year for the County where we have probably faced the most difficult set of circumstances in our history to date.

The Commandant wrote a very comprehensive Recovery Plan which we have been following although Government changes have meant we have had to be adaptable and quick thinking in our approach. At the heart of the Commandant’s Recovery plan was the introduction of a very strong communications culture so that we could all stay connected. The Commandant also introduced a Training Champion system for each Company. This meant that the Commandants O Group was split into two, essentially one group with all the Company Commanders and the other, the permanent staff and Deputy Commandants. The CTO attended both along with the TSA. These zoom meetings were held every month until September when the full O Group met again at County HQ. The Company Commanders all held zoom conference calls with staff monthly and this was mirrored by Detachment Commanders too. The Commandant held zoom meetings with Detachment Commanders at a Zoom Majlis and held two Zoom Majlis meetings with the senior cadets in the County. Over the last 8 months the Commandant put out 7 Video Bulletins to all cadets and adults via County social media, which proved to be very popular.

The Deputy County Training Officer, Capt. Kim Haynes, who took on the full County Training Officer role during most of the lockdown period, managed with the enthusiastic input of all the Company Training Champions to produce over 150 training presentations which were then programmed for delivery throughout the lockdown and beyond. It was a significant achievement and helped considerably in keeping the County fully engaged.

In the Autumn, the County planned and implemented a programme for opening up all the detachments less those at school locations. The County led the way in the Brigade and launched the reopening of 35 detachments ahead of most Counties in the Country. The Commandant has stressed to all adults that they do not have to come back to duty, but to come back when they feel safe and ready. But there is no doubt that for the few nights detachments were open before the November lockdown, the cadets were extremely pleased to be back meeting their mates and not having to engage on zoom calls ! The County is ready to open again in December. The Commandant has stressed the need to take things slowly and is not expecting the County to be back to normal until at least April.

A new Adult Training package is being put together by Lt Col Mark Benson ably assisted by SMI Philips. A new policy document will be completed by the end of December.

We say a fond farewell to our CEO, Lt Col David Reeve, who will be much missed and the County intend to give him a big send off at the next Officers Mess Dinner night. More to follow on that soon. He will be replaced Major Kevin O’Riordan, currently OC B Company who is already well known in the County and he has been enthusiastically welcomed into the post. The new OC B Company is yet another highly experienced Reserve officer, Major Phil Hurley who takes up post on the 15th December. The County now has a very strong team of Company Commanders in Major Steve Lewis (A Coy), Major Phil Hurley (B Coy), Capt. Matt Easterbrook (C Coy) and Major Darron Moody (D Coy).
We also say farewell and offer a big thanks to Col Mike Frewer our Honorary Colonel who steps down on the 31st December at the end of his tenure and look forward to dining him out in style next year. He is being replaced by Major Cassian Roberts a former Irish Guards officer who was, until recently, the High Sherriff of Worcestershire. Cassian is the brother of Maj Gen Sir Sebastian Roberts KCVO OBE, Colonel of the Irish Guards before HRH Prince William. He is also a friend of the current CGS, General Sir Mark Carleton-Smith KCB, CBE, ADC. The Commandant has asked the new Honorary Colonel to assist the Trust as one of his principle tasks.

The Commandant is scheduled to meet (via Zoom) Maj Gen John Henderson CB on the 16th December, who is the CEO of Staffordshire County Council to look at ways of strengthening recruitment for cadets and adults alike across the County.

There is a long list of adults who have been put forward for awards for their hard work and dedication during the last 8 months. The County has performed particularly well under exceptionally difficult circumstances and stayed true to the cause. Major Rob Bradburn, Padre Stuart Powell, Capt. Kim Haynes and SMI Dave Wiley are amongst those being put forward.

Annual Camp next year will be shortened and undertaken locally at Swynnerton, Leek and CTC Cannock Chase. There will be more on this in the New Year, as this is a very recent and sudden change. Major Ann Dunn moved very quickly to produce an excellent outline plan which has been accepted by Bde. The dates allocated for this County are from the 3rd August to the 7th August inclusive. But expect changes!

The Commandant has been working closely with the TSA to produce plans for a new Army Cadet Safety Management System. A template has been produced and will be given to the O Group for discussion in December.

The cadets within the county have not only had the opportunity to engage in virtual training during the periods when the face-to-face training has not been possible, but also engage in some events that companies have created to inject some fun into what a difficult time for some. These events have included quizzes, competitions and virtual events which have taken place on Zoom and through Facebook, the most recent of which has been the wearing of odd socks to support the anti-bullying campaign. Cadets across the county have joined in on doorstep applause and salutes for the NHS and most recently Remembrance Sunday.

The kind donation of laptops by the friends will now enable the county to offer further support to cadets who have struggled to engage in any of the virtual events. These cadets may otherwise of been at risk of losing the connection with their friends within detachments and across the wider county as well as missing out on training opportunities.